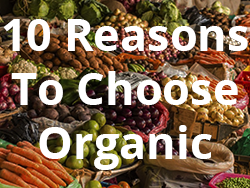 Vegus Juices are organic certified because we believe that organic is better for you. Here’s why:

Research shows that many organic foods have higher levels of vitamins and minerals. In fact, taking organic food as a whole has significantly more abundant levels of the nutrients that are considered essential for health. In contrast, statistics published by both the US And UK governments shows that levels of essential nutrients in non-organic fruit and vegetables fell by an incredible 76% (three quarters!) in just 4 decades ( from 1949 and 1991 ).

3. Organic Food has No Carcinogenic Pesticides

Non-organic farmers routinely use pesticides. Seeds are soaked prior to planting and then the growing plants are regularly sprayed with toxic chemicals. Some of these chemicals have been banned, but only after many decades of use and others continue to be used. Traces of these pesticides are regularly found in a high percentage of fruit and vegetables, which you’ve probably noticed if you’ve ever bought pre-cut carrots or pre-washed salad leaves which often have a strong chemical smell. In 2004 the European Commission stated that a risk to human health from the dangers of pesticides can no longer be ruled out.

4. Say No to GMO by Eating Organic Food

GMOs or genetically modified organisms (plants) are not allowed under organic standards. That means plants can never be genetically modified if they are organic certified. GMOs have been proven to cause severe disruption to the intestinal filae which absorb nutrients. Rats fed GMOs for 3 weeks died, some showing signs of cancer. In contrast in the control groups, the rats fed organic food all survived.

Agricultural chemicals, pesticides and fertilisers contaminate our environment, poison our water supplies and render infertile much of our farmland. Certified organic standards prohibit the use of toxic chemicals in farming and require responsible management of healthy soil and biodiversity.

According to Cornell entomologist David Pimentel, it is estimated that only 0.1% of applied pesticides reach the target pests. The bulk of pesticides (99.%) is left to impact the environment, the earth, water, plant and animal life.

6. Organic Means a Lower Cost to the Environment

Our drinking water is filled with chemical residues from non-organic agriculture and this has to be filtered out before we can drink it. This cleaning process costs the tax payers millions. Sadly, most of the chemicals drain away into the water table, meaning that our water sources are becoming more and more polluted, meaning an ever greater cost to produce drinkable water.

Research has shown that organic farming is better for wildlife and creates less pollution from sprays. The death of many millions of bees has been linked to neonics, which are chemicals contained within the most widely used pesticides produced by Syngenta and Bayer Chemicals. The Environmental Protection Agency has after 20 years, finally admitted the problem but way too late for the millions of bees killed by these pesticides and the vast reduction in pollination (and abundance) of our wild plant life as a result.

Today’s non-organic agricultural practices have resulted in a huge loss of species as farmers are forced to increase their profit margins by selecting only the best performing, highest yielding varieties. Non organic farmers now plant just 3/4 of the varieties that were farmed less than 100 years ago. Apart from the massive loss of variety, the dependence on such a narrow range of species has left non organic farmers in a vulnerable position. For example, if a disease attacks one of the few varieties of plants that farmers cultivate now, may result in massive world-wide shortages of basic foodstuffs.

The other problem is that crop rotation is a simple and effective technique used in organic agriculture that reduces the need for pesticides and improves soil fertility. Conversely, when farmers keep growing the same varieties of plants year after year, they become more and more dependent on pesticides as the nutrient levels in soils reduce and the plants become weaker and less able to defend themselves naturally from pests.

In contrast, most organic farmers grow an assorted range of crops, often cultivating the more ancient species which are hardier when grown in a fertile, organic soil than current species which need a lot of chemical assistance to survive.

There is one very good reason to eat organic – simply because it tastes better! This may be down to the slower growing methods, higher nutrient levels or absence of chemical taste from pesticides or a combination of all of these factors.

Vegus Juices are organic certified by the Organic Trust in Ireland, so you can be assured that they are always free from carcinogenic pesticides, GMOs and harmful additives. We grow the seeds in organic mineral rich media so that the resulting sprouts are packed full of nutrients. Why not try some and taste the difference that organic makes?